2020 was going to be the Year of Willem Lodewijk. 400 years after his death Count Willem Lodewijk of Nassau-Dillenburg was to be commemorated in the city of Leeuwarden all year long. This man, who during his lifetime always lived in the shadow of his more famous cousins Maurits and Frederik Hendrik, Princes of Orange (sons of William the Silent), however after all those years still didn’t fully get the recognition he deservs, all due to Covid-19. The opening of the year exactly 460 years after he was born, on 13 March, had to be cancelled and postponed, celebrations were reduced, and the opening finally could take place on 11 September 2020.

The opening of the year took place in the Grote- of Jacobijnerkerk in Leeuwarden, a location that in many ways has connections with “Ús heit” (our father), as Willem Lodewijk is called in the province of Friesland. His wife, a daughter of William the Silent, Prince of Orange, was the first to be buried in the vault under the church. He himself was buried here some 30 years later. He never remarried. As Stadtholder of Friesland, Groningen and Drenthe, his main residence was Leeuwarden, where he died on 31 May 1620. His statue is in front of the Palace of the Stadtholders in the centre of Leeuwarden.

During the opening there were three speakers, taking the guests – who of course had to keep distance from eachother – through the political, military and personal life of Willem Lodewijk. A life that was dominated by service and ambitions, personal happiness and deep sorrow. Bearn Bilker, chairman of the Stichting Nassau en Friesland, held the introduction and there was music from Jan Pieterszoon Sweelinck and Piet Post played by Peter van der Zwaag and Elizabeth Kooy sang music from Constantijn Huygens. Joop Koopmans spoke about the political significance of Willem Lodewijk, Olaf van Nimwegen about the tactical military revolution under Willem Lodewijk and Hanno Brand about the personal life of Willem Lodewijk. The gathering ended with a speech by mayor Sybrand van Haersma Buma of Leeuwarden about the historical significance of Willem Lodewijk for Leeuwarden and the Netherlands, and turned out to be quite knowledgeable about the subject.

Among the guests were several royalty-watchers I know, but also prominent people like Jonkheer Tjalling van Eysinga and JD van Ravesteijn from Van Ravesteijn Theater & Events, who already for many years dresses up as Willem Lodewijk and gives tours through Leeuwarden. The armor on the stage in the church is his. He actually wore it at the opening of the European Heritage Days on 12 September, but unfortunately I couldn’t go there.

In the Historisch Centrum Leeuwarden one can visit the War Room of Willem Lodewijk, a small exhibition about the Stadtholder as a war leader. Free entrance during opening times until November 2021.

By the way the Stichting Nassau en Friesland is searching for a historian who wants to write a new biography about Willem Lodewijk. He/she will receive 5,000 Euros. The last biography about the Stadtholder dates from 1904! 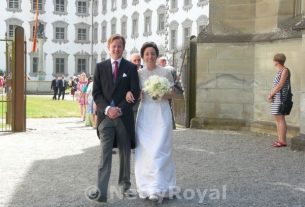 Wedding of Michael and Christina in Salem, Baden 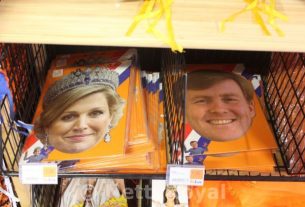 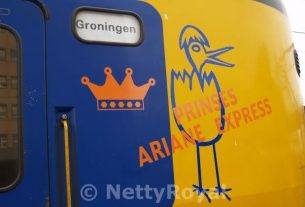 2007 – The Birth of Princess Ariane of The Netherlands