How to open a year to commemorate one of the grandest women in Frisian history? As written earlier 2015 is the The Year of Maria Louise. The official opening of the year on 9 April 2015 took place exactly 250 years after her death in 1765. Maria Louise Princess of Orange and of Nassau, born a Princess of Hessen-Kassel was beloved in Friesland, where she lived most of her life. And she is not forgotten yet.

The event started at the Oldehoofsterkerkhof in Leeuwarden just outside “De Brasserie”, around the corner of the Princessehof where Maria Louise once lived. Speeches by Bearn Bilker, royalty-expert and mayor of Kollumerland, and the mayor of Leeuwarden Fred Crone, also by loco “Commissaris van de Koning” (King’s Commissioner) Jannewietske de Vries. And the words “Start Maria Louise jaar 9 april 2015” were painted on the wall and then revealed.

Afterwards the people invited to the meeting on the occasion in the Grote of Jacobijnerkerk walked to this church. On 20 June a big wall painting will be revealed on this wall, with a “genealogy” with ten portraits of descendants of Maria Louise and her husband Johan Willem Friso, among them monarchs reigning today. It makes one really curious to see what it will look like.

Sitting on “her” throne in the middle of the church was Maria Louise, or actually actress Tet Rozendal, and she must have been there for about two hours before she could finally climb down again. She was a magnificent Maria Louise one must admit. In between the parts of the meeting she spoke, as if she was Maria Louise, about her life and feelings. Very impressive indeed. The music by Wiebe Kaspers and three other musicians was very fitting. Readings were by Bearn Bilker about Maria Louise’s life (see text here) and historian Dr Els Kloek about the role of Maria Louise as woman and princess. There was also a small presentation of the events in the coming months … and that meant even a horse entered the church. Never seen that before, might also never see it again.

At the end of the meeting there were drinks and a few little snacks. And everybody who left got a special Maria Louise bonbon, that I ate just after taking the picture. It was just too delicious …

Maria Louise was the last and most known of the female regents of Friesland. Count Willem Lodewijk of Nassau-Dillenburg (1560-1620), a nephew of the wellknown Prince William “The Silent” of Orange, was Stadtholder of Friesland since 1584 (Groningen since 1594 and Drenthe 1596). Willem-Lodewijk is nowadays known as “Us Heit” (our father) in Friesland. He married his cousin Anna, daughter of William of Orange, who died hardly half a year later during her first pregnancy. She was the first to be buried in the vault in the Grote- of Jacobijnerkerk (church), where most members of this so called “Frisian branche” of the family were buried afterwards.

He never remarried and was succeeded as stadtholder by his younger brother Count Ernst Casimir (1573-1632), who in his turn was succeeded by his son Hendrik Casimir I (1612-1640). As the Dutch were still at war with the Spanish, the Nassaus were to be found on the battlefields often. The successor in 1640 was Hendrik Casimirs brother Willem Frederik (1613-1664). As his son Hendrik Casimir II (1657-1696) was still a child his mother Albertina Agnes became his regent. He became in 1675 the first hereditary Stadtholder of Friesland. Also he died early and left a young son, Johan Willem Friso (1687-1711). His mother Henriëtte Amalia became his regent until 1707 when he came of age.

As King-Stadtholder Willem III – yes the one who also reigned in Great Britain next to his wife Queen Mary II – had died childless in 1702, Johan Willem Friso was the only hope left … if he wouldn’t have a heir, the Princes of Orange in the Netherlands would become extinct. Johan Willem Friso knew what his duty was and in 1709 married Maria Louise of Hessen-Kassel, one year his junior, which seems to have been a happy although very short marriage. The next year the first child, a daughter called Amelia, was born. While his wife was highly pregnant of her second child, Johan Willem Friso drowned in July 1711 on his way to The Hague where he was to take part in a discussion in the succession dispute about the heritage of King-Stadtholder Willem III.

48 days later his wife gave birth to the long awaited heir, Stadtholder Willem IV. The young widow Maria Louise became his regent until 1731. Her son however died in 1751 leaving a young son, Willem V. His mother Anna, born a Princess of Hannover, became his regent but died in 1759. Maria Louise took care of her two grandchildren and was regent again for her grandson from 1759 to her death in 1765, the Tuesday after Easter (the meeting took place on Thursday after Easter). She was the last member of the family to live in Leeuwarden.

The rest of the family had moved to The Hague after in 1747 Willem IV had become hereditary Stadtholder of the United Provinces. Maria Louise on 13 June 1765 was also the last of the family to be buried in the church she had only visited shortly before her death. She was deeply mourned by many.

Reports by Moniek from “History of Royal Women” here and here. It was very nice meeting her in Leeuwarden. 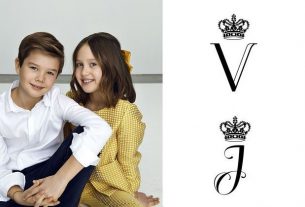 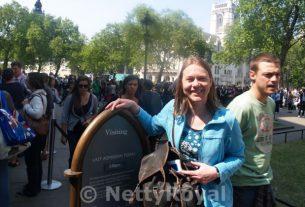 The wedding of the Duke of Cambridge and Catherine Middleton