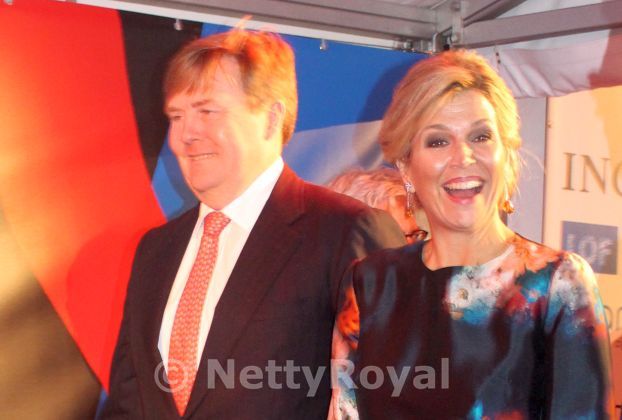 On Saturday 27 January 2018 King Willem-Alexander and Queen Máxima of the Netherlands came to Leeuwarden, in the north of the Netherlands, to open the European Capital of Culture 2018. Not only Leeuwarden, but also the Province of Friesland and even the neighbourprovinces Drenthe and Groningen are part of a year of celebrations and activities. The theme is “Iepen Mienskip” (open society). From the late 16th century to 1765 Leeuwarden was the residence of the Frisian Nassaus, ancestors of the present Royal House of the Netherlands.

There were lots of activities in the long weekend of the opening, 26 to 28 January 2018. The official opening was in the evening of 27 January. Walking through the streets of the city I saw flags of the event, the European flags, a stand on the street with event souvenirs. Although there were many people in the streets, in one of the shops I heard it had been rather quiet for a Saturday. Probably all these people prefered the many activities.

The press centre was well organised I must say. A small potato sack with information, a few small gifts including a plastic rain cape that proved to be quite handy in the evening. And my ticket for the theatre play Marijke Muoi that afternoon. It turned out Leeuwarden was so cold that I bought myself a sweater and a shawl when returning from the play. And later on I was glad I had done it. But before the evening programme I returned to the press centre, where they had a hot meal and drinks for the media. I must say it was delicious.

Finally time to be driven to the city theatre De Harmonie where the King and Queen would arrive at 8pm. We were there well before 7pm. Luckily with my much smaller camera I managed to get a place away from the cold wind and rain in the corner at the end of the red carpet. Next to me were some camera teams. It turned out not to be the very best place, but I am not really a professional photographer and was glad with the view I had and the photos I was able to take for my blog.

Unfortunately it turned out most important guests had other things to do elsewhere in Leeuwarden. They would show up in front of the bunch of photographers, pose, do a few interviews and most of them never got that close to me. Not that I necessarily needed to have their pictures – I got a few nice ones anyway. I did see them and I did see the two Stormruiters (riders on Frisian horses), one of the 2018 projects being presented. And then finally the King and Queen arrived! Despite of the rain they took the time to wave to the people waiting before walking to the red carpet.

They posed with the mayor of Leeuwarden and some other important people before moving into my direction. I managed to snap a few pictures, despite of it being dark and having to use my tiny flash to get something.  Not sure if Queen Máxima looked straight into my cameras in the middle picture below, or to the TV cameras next to me, but at least I nicely caught her on camera.

There was an official ceremony in De Harmonie with some music, speeches and videos promoting Friesland and Leeuwarden. In the meantime we left the area and walked to a café. Unfortunately by the time it had started raining. Surprisingly more free drinks and even snacks in the café. I really didn’t get the time to become hungry. We left there pretty late, so I expect they didn’t want to keep us waiting in the rain for too long. Unlike the about 35.000 people standing on three big squares in the city centre waiting for the opening. On the other hand the press stand turned out to be overlooking the people and we got all the wind and rain. It was not raining heavily but the wind blew it right in to our faces. Long live the rain cape!

We were on the Wilhelmina square with a rather nice view into both directions, apart from some trees blocking the view a bit. Around 9.30pm the King and Queen arrived and were seated halfway the square, facing the rain like us. Then the show could begin. On each of the three squares they had built a 20-metres high tower. The performances were the same for each tower, each square was similar but still had its own unique character and theme with its own musicians. Each tower held musicians: a brass band, a choir and 8 percussionists. They also held two leading actors (a boy and a girl), two children aged 8 to 11 years old, and ten dancers aged 15 to 18 years old.

A clock counted back to zero – like at New Year’s Eve – and everybody started to cheer. At that moment a girl stroke a gong at the Oldehove tower, the most famous tower of Leeuwarden, which was projected on all three 20-metres high towers. The Noord Nederlands Orkest started playing in the Fries Museum. The brass bands, choirs and percussionists started playing, a marching band marched over the roof of the Tresoar theatre. A trumpet started playing while the text “We can’t start without you” was projected on the three towers and a girl was drawn.

Then a real girl appeared at the tower instead accompanied by a harpist. Animated drawings are shown on the towers, then also a boy appears together with a trumpet player. They finally draw a boat – Friesland has lots of water – which they entered. On the sounds of a marimba the boat departed, sails into Friesland and Europe passing several towers in European cities. In the meantime the choir was singing. A musical show started with percussionists, joined by the marching band, brass bands and the choir.

The boat reappeared on the tower, as well as projections of the musicians. The two children were drawing stars over their heads and other chidlren appeared dancing. On each balcony children with lanterns appeared. There were more projections on the towers, including the text “De takomst ropt om dy” (The future is calling you). Then Nynke Laverman – who actually sang during the concert on the occasion of the Portuguese state visit last year – arrived riding on a horse while singing the official song for the event.

Then King Willem-Alexander and Queen Máxima walked towards the tower. A girl and a boy took their hands and walked them up the stairs on the outside. Then the four of them started pulling the bell rope and let the bells ring. At that point, it had just been 10pm, bells in Leeuwarden and all over Friesland started to ring. The European Capital of Culture 2018 had started. On the towers the words “Leeuwarden Friesland Cultural Capital of Europe 2018” appeared Soon the King and Queen had to say goodbye and left.

I thought the show had been quite nice, but a bit short (hardly half an hour), and because it was dark and still a bit rainy and windy it wasn’t always easy to see and hear everything. But overall I think most people attending were rather satisfied with their evening. The TV-broadcast on national day I heard was another story – too much talking and too little showing. Unfortunately after the royal couple also other VIPs had to leave, so I by a few minutes missed the train back home to Groningen. Luckily there was an extra train half an hour later, otherwise I would have needed to wait another hour instead.

The two best photos in this report are not mine, but kindly handed out by the organisation, as long as the copyright information was included. Thanks for a wonderful day, and I hope that 2018 will be a great cultural year for Leeuwarden and Friesland. 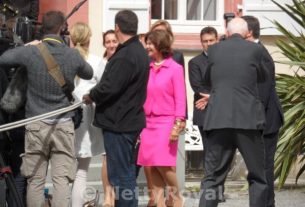