It was an interesting reunion with a dress I did see for the last time in April 2004. I remember vividly that only days before the wedding of Prince Friso of the Netherlands and Mabel Wisse Smit on 24 April 2004 in Delft, The Netherlands, the magazine “Story” managed to publish a drawing of a wedding dress full of bows. So unroyal, that I couldn’t imagine that Mabel would wear that design. But it was exactly what she did. I think it was the only time, at least as far as I can remember, that a royal wedding dress design was leaked beforehand.

As a royalty-journalist I attended my first royal wedding and I can remember the excitement when the civil wedding at the town hall of Delft was about to start. Imagine my shock when Mabel actually did walk in with the dress from the “Story”! Me and my colleagues were seated so close to the entrance that we did have a good look at the entry and the whole ceremony. Thereafter we walked to the Old Church of Delft where the couple was to get married religiously. Being seated on very low chairs, we did hardly see a glimpse of bride and groom anymore.

Now, 14 years later, the dress can be seen at the exhibition “Viktor&Rolf: Fashion Artists 25 Years” in the Kunsthal in Rotterdam, The Netherlands. A lot has happened in these 14 years. Friso and Mabel had two daughters, and Friso died a few years ago as a result of an avalanche in Austria. And my opinion of the dress has changed. Shock has changed into admiration. Not that I would choose the dress myself, but it has grown on me, and I actually do like it. The exhibition gave me the chance to have a close look, closer than ever before, and look at all the details. Yes, there are many bows on the dress and the train, but also the pattern is amazing. The design of course is by Viktor&Rolf, who because of their designs for Princess Mabel didn’t only become famous among fashion lovers.

The dress with three-dimensional train was made of silk (satin, georgette, tulle, ribbon). It took Viktor&Rolf over 600 hours to make the dress, which is decorated with 248 silk bows. Bows by the way have been used by Viktor&Rolf in their designs regularly. And of course bows fit very well with a wedding dress, as knots traditionally represent enduring love.

The other Princess Mabel dress on display in Rotterdam is the dress she wore on 30 April 2013 at the accession to the throne of her brother-in-law King Willem-Alexander of the Netherlands in a longer version. The black dress was made of wool and silk crepe  and has one white arm with a huge bow. The shorter version was worn during the memorial service for Prince Friso in Delft, in the same church where they got married, on 2 November 2013.

I had seen pictures of the doll in a miniature version of Mabel’s bridal dress, but at first couldn’t find it. It turned out it was on display in the atelier you pass when leaving the exhibition in the direction of the pop-up shop. The doll and the dress were made of porcelain (bisque), papier-mâché, hair, silk, satin, georgette, tulle, ribbon and crystals in 2004. Unfortunately the shop itself doesn’t sell anything royal, apart from one postcard. 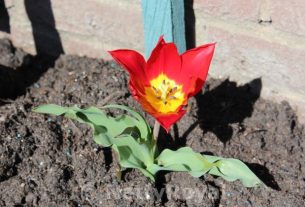 Spring! Flowers in the Garden of Het Loo 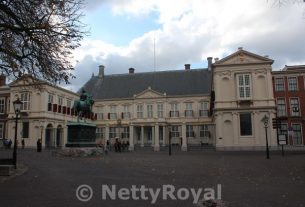 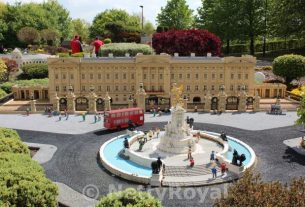