This weekend Palace Het Loo has its doors opened for the last time until 2021. In these three years you will only be able to visit the stables and gardens, and can’t visit the palace itself because of renovation works (see here). I paid my last visit to the palace on 30 December 2017, enjoying the Christmas decoration everywhere. And I certainly wasn’t the only one among my royalty friends. It is sad to think that, depending on what is being organised in the coming years, I might not return until 2021. The shop inside the palace was still open, but I noticed the new one in the entrance building near the parking spot had already been opened.

On Sunday 7 January 2018 the palace will really be open for the last time for quite a while. This and the Christmas decoration was a reason for many people to visit the palace in the last weeks of the year and the first week of 2018. For who still plans to go this weekend: the mornings are the best, it can be rather busy in the afternoon. I arrived shortly after 11am, already being so hungry that I needed an apple pie in the ballroom first before entering the palace. There it was still rather quiet at that time, but inside the palace it was busier. I can’t remember I have ever needed to queue to hand over my bag before.

I do love visiting Het Loo around Christmas time. The decoration is never completely the same. Although there was more to see, this post will only show you the beautiful Christmas decoration, which can be found all over the palace. Above you see the tree in the ticket office, the one in the ballroom/restaurant and one that was in the entrance hall of the palace itself. Christmas trees and Christmas dinners only became regular in the late 19th century. The tradition of fir trees at Christmas likely started in Germany, not arriving in the Netherlands before around 1850. As the Dutch royals used to marry into German royal families, I guess it is not unlikely that they were at least familiar with Christmas trees earlier than many other Dutch people.

Above at the left a Victorian tree. King Willem II might have known them from the palaces of Queen Victoria of Great Britain. The middle one is a frozen tree, prefered by Queen Emma. The cotton wool created the illusion of snow. On top is a German peak with a crown, much admired by visitors nowadays. On the right you see a Christmas tree decorated the way Prince Hendrik, the husband of Queen Wilhelmina liked it. In the tree are Scandinavian straw figures.

Above is a part of the decoration in the chapel of the palace, a wreath at the entrance gate, and one that I found in a corner of the palace, almost hidden for anyone who didn’t need to use the elevator.

Of course I wasn’t planning to buy anything in the shop, but I ended up buying a King’s peppermint tin from the palace (without the peppermints), a magnet of Queen Máxima and a book about the gardens of Palace Het Loo, as they were on sale. I heard there had been other things on sale in earlier weeks, but of course the most popular souvenirs like mugs were already sold out.

I was glad by the way to hear that the palace will continue with the Christmas decoration after the renovation. Unfortunately the dining room of Princess Margriet, usually to be found in the right wing, seems to have been on display this Christmas holidays for the last time. 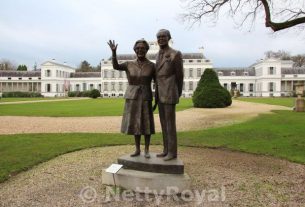 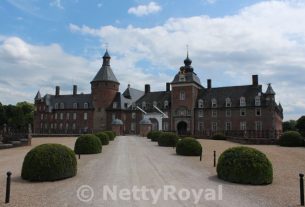 The Castle of the Fürsten zu Salm-Salm in Anholt