Photos and copyright: Gabi (not to be published elsewhere without permission)

As I promised I would have a few pictures of the civil wedding of Prince Félix of Luxembourg and Claire Lademacher on 17 September at Königstein im Taunus, Germany. The couple had chosen to get married at the Villa Rothschild Kempinsky by the mayor of Königstein Leonhard Helm. Claire grew up in Usingen. Both Usingen and Königstein were at some point part of the Duchy of Nassau, where the family of Félix ruled for hundreds of years. Thus it was the perfect place to get married. As Félix pointed out in a pre-wedding interview it is tradition to get married in the home country of the bride.

The happy bride and groom arrived around 12.30pm. Outside the press and a few royaltywatchers were waiting. Their parents, brothers, sister, sisters-in-law and nephews arrived shortly afterwards. The wedding ceremony was just a short one. Despite of the rainy weather bride and groom with their families went back outside after the ceremony for a short photo session. Prince Félix and Princess Claire of course kissed, for the first time as husband and wife. The reception after the wedding was a bit longer than expected.

The bride by the way wore a white peplum dress designed by the Dutch fashion designer Jan Taminiau. The bridal bouquet was made by “Blumen Maiglöckchen” from Königstein, and existed of “roses platinium” and white hydrangea.

For some more pictures see here and here. 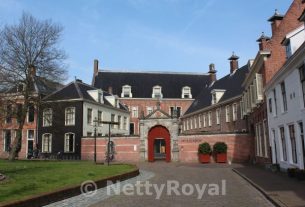 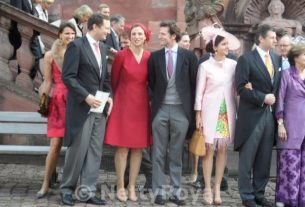 Viktoria Luise got married to her Ferdinand in Amorbach (2)

The wedding of Antonio Muñoz Valcárcel and Princess Kalina of Bulgaria

1 thought on “The Civil Wedding of Félix and Claire”