All pictures: Copyright Gabi P. Not to be posted elsewhere without permission.

On 5 July Prince Amedeo of Belgium married Elisabetta Maria Rosboch von Wolkenstein (in short Lili Rosboch) at the Basilica di Santa Maria in Trastevere in Rome, Italy. Some pictures by Dutch photographer Bernard Rübsamen can be found here It seems it was a lovely wedding, although it was pretty warm. Beautiful bride, gorgeous wedding gown by Valentino. For me it was simply too far away and too expensive at the moment.

A few more interesting weddings. Princess Theresa zu Oettingen-Oettingen und Oettingen-Spielberg, the 30-year-old daughter of Fürst Albrecht and Fürstin Angela, married Carl Christian Oetker “Charly” in an oecumenical service at the Pfarrkirche St. Jakob in Oettingen, Germany, on 12 July. He is a son of Richard Oetker and his first wife Marion Busch. Doesn’t his family name sound familiar to you? Yes, he is a member of the family running the company “Dr. Oetker”, producer of baking powder, cake mixes, pudding, etc. The civil wedding took place in Oettingen the previous week. The bride of course looked lovely, as you can see in the Augsburger Allgemeine.The couple celebrated with over 600 guests. Rumours in Oettingen are that the hereditary prince will marry next year. Another hereditary prince did marry on 12 July … Hereditary Prince Alexander von Isenburg.

The announcement of the engagement of Hereditary Prince Alexander von Isenburg and Dr Sarah Lorenz on 13 February 2014 came as somewhat of a surprise. The eldest child of Fürst Franz Alexander von Isenburg and his wife Countess Christine von Saurma was born at Frankfurt am Main, Germany, on 16 June 1969. His three younger sisters all married very well. Katharina (born 1971) married Archduke Martin of Austria-Este, Isabelle (born 1973) married Fürst Carl zu Wied, and Sophie (born 1978) married Prince Georg Friedrich of Prussia. The only brother, Viktor (born 1979) last year married Jungeun Anès Lee from South Korea. Alexander studied forestry at the Georg-August-Universität in Göttingen, Germany. He also studied economics at the Strathclyde Graduate Business School in Glasgow and the European Business School in Oestrich-Winkel. In 2007 he took over the family business and is now residing at Birstein Castle.

The bride, Sarah Maria Luisa Valentina Lorenz, was born in München, Germany, on 12 February 1981 as daughter of Holger Lorenz and Constance Neuhann. Her mother remarried in 2013 Lothar Strobach. Sarah has one brother, Simon (born 1982). Sarah attended Sevenoaks School, Kent, Great Britain. Both her father and paternal grandfather were doctors. Also her mother was from a known family of surgeons in the third generation, although most family members were eye doctors. Constanze Neuhann however specialised in plastic and aesthetic surgery. Sarah followed in her mother’s footsteps. She studied at the “Institut für Geschichte und Ethik der Medizin” of the “Munich Technical University”, and completed her medical diploma in 2007. She is also specialised in plastic and aesthetic surgery, as well as burn care. She started her career in the trauma unit of Schwabing Hospital in München, and afterwards worked at the Bogenhausen Hospital in München. She gained experience at the Sushma Koirala Memorial Hospital in Nepal and spent four months in Tanzania. Her mother is one of the founders of the organisation WomenforWomen, and the current president. Sarah loves skiing, climbing mountains, diving, travelling, theatre and opera.

The civil wedding of Alexander and Sarah took place in the Stucksaal at Birstein Castle, Germany, on 14 June 2014. The couple shortly appeared in the courtyard. There was a small intimate celebration in the castle with the family.

The religious wedding was held on 12 July 2014 at 1pm at the Benedictine Abbey of Frauenwörth on the “Fraueninsel” (The Women’s Island) in Lake Chiemsee, Bavaria, Germany. The service was led by the auxiliary bishop of Fulda, Prof. Dr. Karlheinz Diez, assisted by the pastor of the Fraueninsel, Konrad Kronast. Witnesses were Johanna Katharina Braun, Freiin Cécile von Fürstenberg, Freiherr Franz Mayr-Melnhof, Prince Floris van Oranje- Nassau, Van Vollenhoven, Alexandra Schiffer and Kai-Harald Solmitz.

The guests were taken to and from the island by a boat called “Irmingard”. Also bride and groom returned to Gsadt am Chiemsee on this ship. From there they drove off in a Mercedes 600. The party with about 160 guests took place in a big tent in the garden of the house of the bride’s mother in Söchtenau.

The homecoming of the bride will be celebrated in the courtyard of Birstein Castle on 16 August 2014, starting at noon.

A very nice photo gallery can be found at Rosenheim24.de. 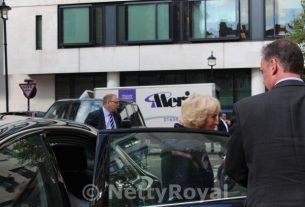 3 thoughts on “Romantic Wedding on Chiemsee-Island”