From 10 to 12 October 2017 King Willem-Alexander and Queen Máxima of the Netherlands paid a state visit to the former monarchy of Portugal. Among the people invited for the state banquet and the return concert were Dom Duarte, Duke of Bragança – heir to the Portuguese throne – and his wife Doña Isabel. On 11 October the Dutch royal couple, together with the Portuguese president Marcelo Rebelo de Sousa opened an exhibition in the Tecto Pintado Hall at the Museo Nacional Arte Antiga.

Most interest went to the exhibition “Rembrandt. Missing Links – Rijksmuseum and the Royal Collections of the Netherlands” on display from 12 October 2017 to 7 January 2018. The Rijksmuseum in Amsterdam gave the Rembrandt painting “Landscape with a Stone Bridge” on loan for the exhibition. The press information and some articles also say that the Royal Collection has given on loan a few important pieces from the 16th and 17th century, showing the long relationship between the Netherlands and Portugal. Among them a portrait of King Charles V (of Spain), his sister Eleonora of Austria, portraits of Sabina Delphica and Eleonora Mauritia of Portugal. There is also a letter by Emilia of Nassau about her marriage to Emanuel of Portugal. Some press photos showed the portraits, but what is the actual connection? Just such a pity I can’t find any further information about these ties between the families mentioned anywhere in the reports about the state visit.

The most visible link between the royal families of Portugal and the Netherlands can be found at the Prinsenhof in Delft, in the former Saint-Agatha Monastery. Between 1572 and 1584 – when he was killed there – part of the building was a residence of Prince Willem of Orange (1533-1584). When entering the Prinsenhof don’t go straight into the museum, but visit the Walloon church on the right of the entrance hall. About in the middle of the chapel you’ll find a big closing stone on the floor saying in French “Entrée de la sepulture de la Maison Royale de Portugal alliée a celle de Nassau et d’Orange.” (Entrance of the grave of the Royal House of Portugal linked to that of Nassau and Orange).

In my possession is the Dutch book “Emanuel van Portugal en Emilia van Nassau” by mr. dr. J.L.J. van de Kamp, published in 1980, which quite extensively tells the story of the marriage and background of these two royal descendants. In 1531 Antonio was born, the son of Infante Luis of Portugal, Duke of Beja (son of King Manuel I of Portugal) and Violante Gomes “A Pelicana”. They are said to have married in secret. During the dynastic crisis in the 1580s Antonio in July 1580 was proclaimed King of Portugal, but was defeated after 20 days. After having been defeated indefinitely in July 1582 he went into exile, and died in France in 1595.

As Prior of Crato Antonio wasn’t allowed to get married. He however had several illegitimate children by various women. In 1582 when Antonio went into exile in France and later to England, he took with him two of his sons by Ana Barbosa: Manuel or Emanuel (ca. 1568-1638) and Cristóvão (1573-1638). Emanuels first visit to the Republic of the Seven United Netherlands took place in 1586. He for sure met the Prince of Oranges sons Maurits and Justinus, and his nephew Willem Lodewijk at that time.

Emanuel and his brother visited the Dutch Republic again in April 1597. Prince Maurits of Orange had asked his sister Countess Emilia of Nassau (born 1569) to act as hostess at court as long as he was away. Emilia and Emanuel soon made plans to get married. Emanuel officially proposed and asked Prince Maurits permission to marry Emilia. He told his sister that Emanuel was a Roman Catholic, an illegitimate child and also poor without any good prospective. The couple however didn’t give up. On 7 November 1597 Emilia and Emanuel married secretly in The Hague, in a Roman Catholic service.

Maurits let Emilia keep her allowance from her father’s heritage, but she had to give back all jewelry he had given to him and wasn’t allowed to keep servants he had given her. She left soon for Wesel (nowadays Germany) to be united with Emanuel. Late September 1598, after the birth of her first child, she was back in Delft to collect her allowance. It however wasn’t until May 1609 that Maurits, Emanuel and Emilia reconciled. In later years the couple also lived at the castle of Wychen, The Netherlands, and in 1617 Emilia bought a house in The Hague.

Their life however was never too easy and Emanuel always had lots of difficulties to collect money from the States General to support his family. In May 1625, after Maurits’ death, Emanuel and his eldest son left for Brussels, Emilia however refused to go to live with the enemy. With her daughters she left for Geneva, Switzerland, where she would die in 1629. She was buried in the St Pierre cathedral in Geneva. Emanuel in 1630 remarried Luisa de Osorio. He died in Brussels in 1638 and was buried there too.

The descendants of the couple were:

The website of the Walloon church mentions that buried in the church are Emanuel Antony as well as four of his sisters. Digibron.nl mentioned that these sisters are Emilia Louise, Anna Louise, Eleonora Mauritia and Sabina Delphica. The grave stone was found back underneath church benches during restoration work at the church between 1950 and 1962. The stone depicts the arms of Nassau and Portugal. 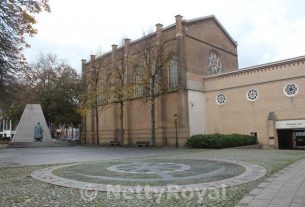 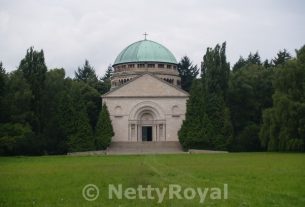 The Mausoleum at Bückeburg Palace 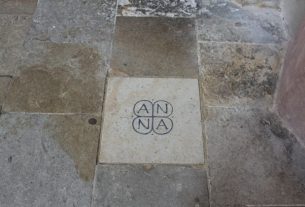 The Grave of Anna of Saxony can finally be found