Few hotels have ever been a royal residence or the residence of a King’s mistress. The ones you can stay in are often quite expensive, but they don’t have to be, and they can be very nice to stay in if you’re travelling. I am certain there are more than I listed here, but these are the ones I know off. I’d love to hear your suggestions.

During my recent trip to London I stayed in a hotel with a royal past: the Grand Royale London Hyde Park Hotel. What’s the hotel’s royal connection? At the turn of the 20th century the house was built and commissioned by King Edward VII of Great Britain as a private residence for his mistress, the actress Lillie Langtry. The outside, the ground floor, the stair case and the breakfast room are worth a good look if you’re staying here. The hotelrooms I have seen are nothing special, but they’ll really do according to me and some others at least. I have seen much worse London hotels. I had a cheaper room in the basement by the way, in case you wonder. If you really want something special there always is the Lillie Langtry Suite.

Once a rather posh hotel, it seems the Palais Schwarzenberg in Vienna has turned into a casino. Years ago when I visited Vienna with my mother we had something to drink and a slice of cake in the garden at the back. I wish I could have stayed at this five star hotel, but it was far over our budget.

The Baroque palace is owned by the princely family zu Schwarzenberg. It was built in 1697-1728. The palace doubled as James Bond’s hotel in the 1987 film The Living Daylights.

In the outskirts of Frankfurt am Main you can find the Schlosshotel Kronberg. This not very cheap (but from what I heard lovely) hotel was built 1889-1893 as the Friedrichshof Castle for Victoria, the widowed Empress Friedrich III of Germany and a daughter of the british Queen Victoria. Her daughter Princess Margarethe inherited the castle. She was married to Prince Friedrich Karl von Hessen and the family moved into the building in 1902. She transferred it to her surviving sons in 1922. 1945-1948 the American forces confiscated the castle and a huge part of the collections and art treasures got lost during this period. Afterwards the castle need to be renovated because of war damage and transformed into a modern hotel that opened its doors in 1954. In the 1960s the castle was transferred to the Hessian House Foundation. After a fire in 1967 another renovation took place.

For a luxury city break in Dresden the Hotel Taschenbergpalais is a great hotel, if you can afford it. It was built 1705-1708 as a present of King August the Strong of Saxony for his mistress Countess Anna Constantia von Hoym, better known as Countess Cosel. The last renovations took place in 1934, but during the bombings at Dresden in February 1945 the building was destroyed. It was only rebuilt 1992-1995. Its reconstruction costed 127,8 million euro. The five-star-hotel opened its doors in 1995.

I just discovered another hotel in Dresden with a royal background, the Schloss Hotel Dresden-Pillnitz. Whereas the baroque 18th century Pillnitz Castle is a real museum, and the former summer residence of the Kings of Saxony, the hotel is situated on the premises. I’d better say the site of the hotel was once home to the bakers and royal kitchen staff and the king’s chemists. The hotel exists since 1998. The location is in the outskirts of Dresden, but is certainly beautiful.

I once admired the outside of this hotel on the shores of the Bosphorus. The Çiragan Palace was built by Sultan Abdulaziz 1863-1867 and is the last example of the tradition for Ottoman sultans to built their own palaces. The Sultan himself couldn’t enjoy the building for a long time as he died in 1876 and his successor Sulta Murad V moved into the palace. The partly wooden palace was destroyed by a fire in 1910. Only the outer walls remained intact. After having served as a football stadium the ruined palace in 1989 was bought, restored and turned into a modern hotel. Since the renovation in 2007 the building resembles the authentic palace more. The Sultan’s Suite is one of the most expensive hotel suits in the world.

Several royals and celebrities celebrated their wedding in this palace hotel including Prince Muhammad Ali of Egypt and Princess Noal Zaher of Afghanistan in 2013.

Two former palaces of the Dutch Stadtholders have turned into hotels and are rather reasonably prized. The Stadhouderlijk Hof in Leeuwarden has a long history. The original building was built in 1564 and in 1587 became the house of Stadtholder Willem Lodewijk of Nassau-Dillenburg. In the 17th and 18th century the building was extended. When in 1747 the Stadtholder of Friesland, Willem IV, became Stadtholder of all Dutch provinces, he moved to The Hague. Despite of huge changes at the end of the 19th century, the building was only sold to the Municipality of Leeuwarden by the royal family in 1971. Since 1996 it is a four-star hotel in the centre of Leeuwarden. If I remember well from my stay a long time ago the rooms were named after Nassaus.

Close to my home there is the Prinsenhof Groningen, where even King Willem-Alexander and Queen Máxima of the Netherlands stayed for a night in 2013. I never saw the rooms but have had lunch in the grand café. In the late 16th century the building became the official residence of the Nassau Stadtholders when they were in Groningen, which was not too often. The gardens still exist, although the building itself has undergone lots of changes. The hotel only opened in 2012. 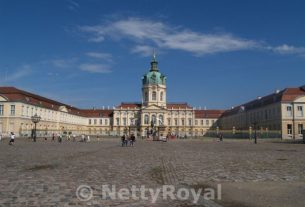 The Summer Residence of Queen Consort Sophie Charlotte of Prussia 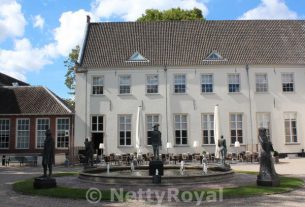 The hidden gardens of Charles V