It is one of those weeks that you really wonder whether there ever comes an end to the royal news. Of course there is royal news daily, but at the moment it is a bit much. Apart from Scandinavia – happily as also the Swedish King had his birthday this week on 30 April – I am responsible at work for the news of all the other royal houses in the world and they are extremely busy. I am almost glad the Argentinean state visit to Belgium was cancelled.

While everybody is preparing for Baby Sussex, who still doesn’t want to see the world, there is lots of other royal news. Baby Sussex at least seems to be late and is even messing up his/her daddy’s calendar. We actually wondered if it will be a weekend baby, born on one of the busiest days of the week. In that case it would be Saturday 4 May I guess. Let’s see if the baby listens to me. I still go for a girl called Victoria by the way. Victoria Diana would sound quite nice to me.

I usually work on weekdays only, but last weekend of course there was King’s Day in the Netherlands, which meant almost a full day of work, including watching TV. Did a bit of afterwork on Sunday. And since Monday there is simply a lot to do, either preparation, current events or writing information afterwards. Of course on 30 April and 1 May there was the throne change in Japan (the coronation will be later this year). Also the events for the coronation in Thailand have started – the actual coronation taking place on 4 May, with two more days full of events afterwards.

Unfortunately on 4 May we will also have the funeral of Grand Duke Jean of Luxembourg, and many, many noble and royal guests have already announced that they’re coming.

If Baby Sussex doesn’t throw a spanner in the works I really hope for a nice and quiet week afterwards. A bit of time for hobbies and blog would be very welcome.

Oh yes, did I mention I had quite a few appointments in the previous week also? Hospital, hairdresser, a lovely meeting with Canadian royalty-watcher Loretta here in town (dinner at Soestdijk) and a great dinner in Oranjewoud (being home after midnight). The last two appointments by the way were more than worth it getting a bit less sleep.

Celebrating 40 years as a royalty watcher 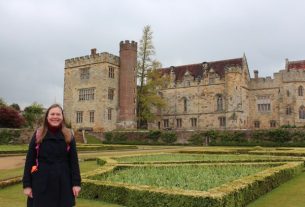 2 thoughts on “From the UK to Thailand – A busy week”