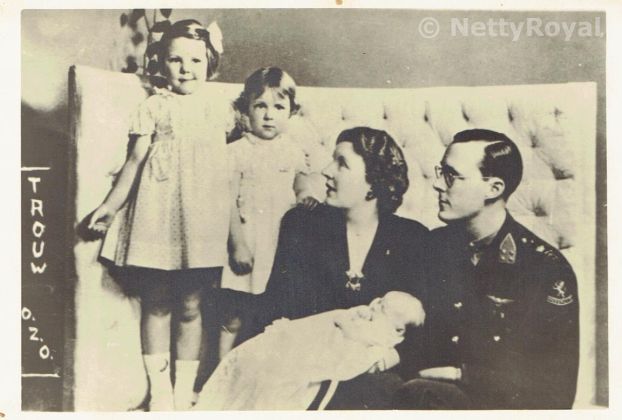 On 19 January 1943 – today 75 years ago – a little princess was born, far away from home. The third daughter of Princess Juliana and Prince Bernhard of the Netherlands was named Margriet Francisca. Her elder sisters Princess Beatrix and Princess Irene had been born at home at Soestdijk Palace in the Netherlands. Their little sister was born at 7.00pm in a room at the Ottawa Civic Hospital in Ottawa, Canada, on the occasion declared Dutch soil by the British King George VI, to avoid that the little baby would receive the Canadian nationality. The healthy baby weighed more than 7 pounds. Prince Bernhard, who lived in London, Great Britain, most of the time, had flown to Canada in time to be present.

There were no salutes for the princess, but the day after her birth the bells in the Peace Tower of the parliament played Dutch songs and the Dutch flag waved on top of the tower. The journalists and others were presented with the traditional “beschuit met muisjes” (rusk with sugared aniseed balls). At 3.27pm on 20 January 1943 Prince Bernhard presented his daughter, dressed in a white organza dress and laying on an pillow with old lace. The Dutch consul-general in Montréal, G.P. Luden, read the official birth certificate. Then it was signed by Prince Bernhard, the Dutch ambassador in Canada Frans Groenman and Princess Julianas private secretary Willem van Tets. They signed it with a fountain pen belonging to Dr. John Puddicombe, who had been the obstetrician at Margriet’s birth.

Two days after Margriet’s birth her grandmother Queen Wilhelmina held a speech in London for Radio Oranje to explain why her granddaughter had been given the name of Margriet (my translation).

“Who doesn’t remember the daisies [the Dutch name of the flower is Margriet) blooming in the month of May in the meadows and the fields, that each year again cover the memory of all the suffering and the grief of those terrible days in May 1940 with their whiteness, whispering to us about a better future. But above all, this name is a respectful tribute to the memory of our heroes on land and at sea, fallen wherever in the world and to them, who died as martyrs for the cause of the fatherland. Their memory lives on, not only in all of our hearts, but also in this new, great happiness God has given to my children. May Margriet soon be given to grow up in her homeland, in the midst of her people, and like her blooming namesakes in the fields, be a living and ever-renewing tribute to all, who brought the great sacrifice, that once will turn out the seed, from which a truly free and great Fatherland and State will emerge. I conclude this explanation with the wish, to be found deep in the hearts of the parents, that Margriet, if she has reached the right age, will be able to show to have the true and profound spirit of the word Dutchman, such as you all have demonstrated again in the past years.”

Queen Wilhelmina also announced that the merchant navy would be the godparent to her granddaughter. The christening of Princess Margriet Francisca of the Netherlands took place at the St. Andrew’s Presbyterian Church in Otttawa on 29 June 1943 at 1pm, the 32nd birthday of her father Prince Bernhard. She was baptized by the Rev. Dr. Winfield Burggraaff. Apart from the merchant navy – represented by seven people – her other godparents were US-President Franklin D. Roosevelt (represented by Lewis Clark), Queen Mother Mary of Great Britain (represented by the Earl of Athlone, governor-general of Canada) and Martine Röell née del Court van Krimpen. Queen Wilhelmina personally flew to Canada to be present at the christening. Also present was the Canadian prime minister William Lyon Mackenzie King. Most of the service was held in Dutch.

Only on 2 August 1945 the little Princess would set foot on Dutch soil for the first time. Her special bond with Canada however has always remained and the Princess regularly visits the country. She still is the patron of the Dutch merchant navy.

Years ago I visited a flea market when in a box full of postcards of the Dutch royals I found a tiny card, that immediately caught my attention. On the outside was a small coat of arms. The inside – still with a piece of blotting paper – shows a photo of Princess Juliana and Prince Bernhard in 1943 with their children Beatrix, Irene and Margriet. Furthermore the text, with the signatures of the parents below it (not sure whether they’re real or printed), says:

“Both of us thank you for the good wishes at the birth of our daughter Margriet Francisca.” 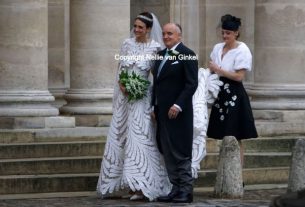 An imperial wedding in the city of love